6 out of 10 Nativity Plays performed by schools, nurseries, preschools, playgroups and churches may accidentally break the law in one of three ways… 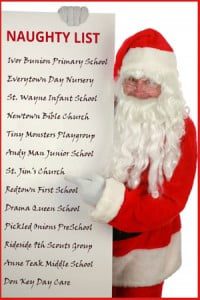 Over the last few weeks thousands of schools, nurseries, preschools and churches have performed Christmas musicals and nativity plays, not just here in the British Isles, but also in the 40 or so countries around the world, which we regularly sell to. However, behind all the costumes, glitter, joyful songs and smiling faces, it may shock you to know that in our experience, roughly 6 out of every 10 establishments staging nativity plays, may have inadvertently broken the law in one of 3 ways…

It is a legal requirement worldwide that a performance licence is in place for any performance of any play or musical. This includes children’s Christmas musicals and nativity plays. We make it extremely easy for customers to buy their licence at the same time as they buy their performances from us, for the low price of just £10. There are no forms to fill out and we believe that our prices are the lowest in the market, yet only around 40% of customers actually buy a performance licence.

The big problem is that there are a lot of common misconceptions which we hear all the time… We’re only performing to parents… We’re not charging admission… We’re only using a small part of the script or just a few songs… Our children are only 3 years old… and in all these cases it sadly makes no difference whatsoever. A performance licence is still required by law. (In the UK via the ‘Copyright, Designs & Patents Act 1988’, and worldwide via the ‘Berne Convention’ and the ‘World Intellectual Property Organisation’).

But the most common misconception we hear is when customers say… we’re already covered through the blanket licence we have through the PRS / MCPS / CCLI / etc... Unfortunately this is not the case as none of these licences or organisations cover the staging of nativity plays, not just for us here at Learn2soar but for our competitors as well. Therefore, we are the ONLY providers of the licence you need to do any one of our plays. While we obviously don’t have access to the sales data from any of our competitors, we’d be very surprised if the 40% licence buying figure that we see, was wildly different for any of them.

Why do you need a performance licence? Buying one keeps your performance legal and stops you from potentially receiving a heavy fine. Also, they are a valuable source of income for composers, writers and performers. If you are using and enjoying their material, isn’t it fair to give them what they’re due?

Last year half a dozen schools, nurseries, preschools and churches who sadly ignored our warnings were eventually fined. Unfortunately, this year it looks like even more establishments may be affected.

If you haven’t bought your licence yet, don’t worry, we have an amnesty in place until January so there’s still time to get your licence now from our performance licence page by clicking here.

If you’re planning to distribute videos or recordings of your nativity plays, then you need to obtain a Recording Rights Licence to legally allow you to do so. Again, we here at Learn2soar are the ONLY providers of the licence you require for one of our plays. Prices currently  range from £7.50 to £50, but in some cases these licences are even available free of charge!

Statistics in this area are harder to come up with as we know that a lot of establishments don’t record their show at all. However, at the moment only 2% of our customers obtain a recording licence from us and it’s clear that this number should be a lot, lot higher.

Just in the last few days we’ve had to send warning letters to a few schools who have  tried to sell DVDs of their plays, without purchasing a recording licence. This is in effect an act of piracy. However, you can cover yourself instantly by obtaining a  Recording Rights Licence  here.

Following on from the last point, it’s also worth noting that we don’t allow material from any of our products to be placed online in any way, shape or form. The most frequent way this rule is broken is via videos being placed on YouTube or Facebook. More surprisingly though, we’ve also found customers who have placed entire scripts, songs, backing tracks, sheet music or song lyrics online! Whenever we contact the people involved to ask for it to be removed, they always say the same thing… We just wanted to provide an easy way for our children to learn their parts… However, not only is this illegal but it unfortunately allows other potential customers to use our nativity plays for free, thereby robbing us of our rightful income.

We also faced a difficult situation a few years ago when we discovered that a criminal organisation in Russia or China had downloaded several of our publications via unauthorized postings on various school websites. These gangs were then re-selling our nativity plays via a fake website for criminal gain! But that wasn’t the worst bit… customers who were downloading from these fake websites weren’t just getting an incomplete pirated nativity, they were also getting a nasty computer virus added to the download! For this reason alone we are sadly having to clamp down hard on anyone who places any of our material online without permission.

In summary, those are the three main ways that schools, nurseries, preschools, playgroups, drama clubs and churches are accidentally breaking the law. And we haven’t even mentioned the mass copying of our CDs and downloads which we know takes place!

Over the next month, we’ll be sending out warning letters to a number of establishments in relation to all these problems. Therefore, if you think you might be affected, we recommend you take action to rectify the situation now…

Finally, regardless of all the above, we do want to thank ALL our customers who have staged one of our Christmas nativity plays over the last few weeks. We’ve had the privilege of watching two of our productions over the last week: Big Bad Ben Of Bethlehem and The Egyptian Nativity. Both were absolutely outstanding (and licensed correctly). The dedication and hard work that went into the performances was first class and we feel sure that though we’ve not seen the thousands of other performances of our products, an equal amount of hard work will have gone into each one. So well done for all your efforts and we hope that you have a well deserved, peaceful Christmas rest.