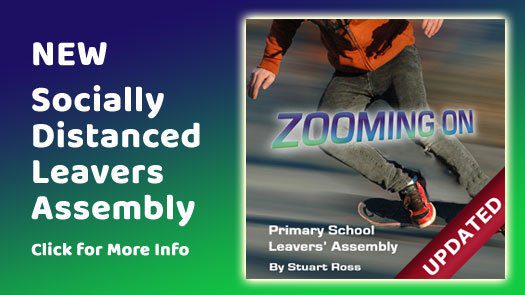 It’s that time of year again when teachers everywhere are preparing for their school leavers’ assembly. If you’re starting to make plans but find yourself short of inspiration, don’t panic! On this page you’ll find 10 leavers’ assembly ideas for you to use for FREE.

However, we know that there are many schools who have already used every one of them and are now looking for something new. So with you, our most loyal customers in mind, here are ten great leavers’ assembly ideas for you to use for free. Take any of them and add them to your favourite Learn2soar leavers songs, for a spectacular presentation, which will live long in the pupils and parents memories.

Please note that although a few of the following ideas are found on other products / webpages, in each case we’ve tried to offer a fresh, new twist on each idea:

Set the children the challenge of writing a play about an alien spaceship that lands on the school playground. A group of aliens enter the school with no knowledge of humans, feelings, school or our planet. The aliens have many questions which need answering, such as:

As the children answer the questions, they share their memories of school, along with their feelings about what the future holds.

Stage your own talent competition in the style of ‘Britain’s Got Talent’ or ‘The X-Factor’.

Make sure you have some ‘judges’ prepared with funny or poignant things to say. Buzzers are optional!

The children could sing, dance, tell jokes, perform simple magic tricks, display a sporting or artistic skill and so on.

If the children can write a paragraph to explain the reasoning behind each award, it also becomes a fun way to reminisce about the children’s time in school.

For years now, most schools have produced a basic audio-visual presentation of the children’s time in school, to display during the leavers assembly. This usually consists of simple PowerPoint photos shown over a suitable song. But this year, why not make it a bit different?

Firstly, instead of just showing plain photos, try to also incorporate poems, artwork, famous quotes and sayings, all around the themes of leaving, change, goodbyes, growing up, etc. For some great ideas, slides and resources along these lines, head over to our Pinterest page by clicking here.

Secondly, there are several free apps which will help you show your presentation in a unique way, rather than just relying on PowerPoint:

Please note that for both of the above websites, charges can occur depending on your usage. However, the free versions of both sites should be more than suitable for your needs. Other websites and apps offering similar services are also available.

In the first Harry Potter book, a magical ‘Sorting Hat’ is used to divide the Hogwarts’ pupils into houses.  The speaking hat talks about the character of each child, detailing their hopes, fears, strengths, weaknesses and ambitions.  In the same way, during your leavers’ assembly place a hat on each pupil’s head in turn. Then have someone read out a lovely paragraph about that child. The passage could be written by a teacher or by one of the child’s best friends. This idea works best if the reader is off-stage with a microphone, using a funny voice to mimic the voice used in the films.

With the help of the children, write a simple play set in the year 2100. Your pupils have gathered for a class reunion and now they are all in their 90’s! (Wearing grey wigs and using walking sticks / walking frames).

They look back and reminisce on their time in school, as well as discussing their subsequent careers, life accomplishments and experiences.

To liven up the play, it’s a good idea to throw in some statements about the future that will get people smiling. For example,

“Wow, we’ve made it to the year 2100. Isn’t it strange how things change over time? When I was a child the England football team couldn’t win a thing, but now they’ve gone and won the World Cup five times in a row!”

… “Not everything changes though. You’ll never guess what new album I just downloaded, ‘Now That’s What I Call Music 4792’!”

… “I’m glad to have just made it here to the reunion at all. The space pilots are on strike again so I had to teleport here from my home on the moon. I hate having all the atoms in my body taken apart and then reassembled. I always feel like I’ve got something missing!”

This idea is similar to the Harry Potter sorting hat suggestion above, but instead it’s based on the Marvel Avengers films. In the Marvel universe, a secret agency called S.H.I.E.L.D tracks all the super-powered people in the world, spying on them and keeping records about their abilities. So here’s the idea: Dress a group of pupils as ‘Agents of S.H.I.E.L.D.’ They only need to wear black suits, ties and sunglasses. Prepare a simple script for them in which they deliver a report on each pupil who is leaving, detailing their characteristics, their achievements and of course their hidden superpowers and secret identities!  Have fun! Accompany each child’s paragraph with photos of the child in question, projected on the screen behind the actors. This idea also fits in very well with our ‘Hero Assembly’ taken from our Racing On Leavers’ Assembly.

8. ABC Of Our School

If you are thinking about using any popular songs in your leavers’ assembly, then you should seriously consider using Disney songs. The themes and lyrics in many of them are perfect for any leavers’ assembly. Use several of them together to make an unforgettable medley. Here are some suggestions:

Finally, for church schools, or for those schools that want to have a more spiritual side to their leavers’ assembly, you can’t go wrong with including elements of Psalm 23… “The Lord is my Shepherd.”

Use readings from modern versions of the Bible, create artwork based on the passage and prepare a computer presentation which shows the way a shepherd cares for his sheep, comparing it to the way God watches over us throughout our lives.

If you want to include some songs on this theme, we recommend one of the following modern hymns:

A Final Word on Preparation and Rehearsal Time

All 10 of the leavers’ assembly ideas on this page will require time and energy from you to make the assembly a success.  So please remember that if preparation time is short or if you have limited opportunities for rehearsals, we strongly recommend that you consider using one of our ready-to-use leavers’ assemblies instead. Click here for details.