“This is the story of the Little Black Cloud,
Who wanted to share his rain around!”

As it’s nearly time to start planning for all those harvest assemblies and harvest / thanksgiving services, we wanted to take a look back at ‘The Little Black Cloud‘.

This always popular mini-musical is one of the shortest, simplest performances that we’ve ever published. The Little Black Cloud was written in 2002 and eventually published in September 2004. It was actually designed purely as a harvest musical, to be used in UK schools. However, since then it has been performed all around the world, at all times of the year. END_OF_DOCUMENT_TOKEN_TO_BE_REPLACED

The start of a new school year usually means that plans and preparations for harvest assemblies and Autumn festivals are in the pipeline. To help you out, we’ve updated our Pinterest page by adding dozens of harvest assembly ideas. Harvest crafts, harvest songs, harvest plays and musicals for all ages from 2 to 11. Perfect for any school, preschool or church.

END_OF_DOCUMENT_TOKEN_TO_BE_REPLACED

It’s Harvest time! As many schools and churches are now in full preparation for their harvest festivals, teachers and children’s church workers everywhere are looking for harvest assembly songs and ideas…

Well there’s no need to look any further than Learn2soar Music’s range of harvest assembly songs and ideas. We have four great harvest CDs/downloads suitable for ages 3-11. Each contains catchy songs, simple scripts and lots of extra fantastic resources:

This truly is a bumper harvest assembly songs and ideas CD/download.  With seven songs and dozens of pages of stories and ideas. You have everything you need for a harvest spectacular, or split up the material so that you have plenty of songs and ideas for the next several years in a row. Either way it’s fantastic value for money.

What teachers say: “We used this CD with our whole school from Y1 to Y6. Each year group performed a different song, while the script was read/performed by the older children. It went very well indeed. Thank you very much.” – J Crompton – Music Teacher END_OF_DOCUMENT_TOKEN_TO_BE_REPLACED

We’re delighted to announce that Learn2soar Music has now begun placing links to resources and ideas on Pinterest:

To start with we’ve created 4 boards for:

In addition to linking to our most popular products, each board also contains art/craft ideas, printable resources, costume / staging ideas, inspirational quotes / prayers and even one or two recipe suggestions! Over the coming months we hope to keep adding more and more.

If you’re on Pinterest already then please give us a like or a follow. And if you’re not on Pinterest yet, then you probably should consider it! It only takes a minute to sign up and you’ll find it full of valuable ideas and resources for every school / church / children’s group. 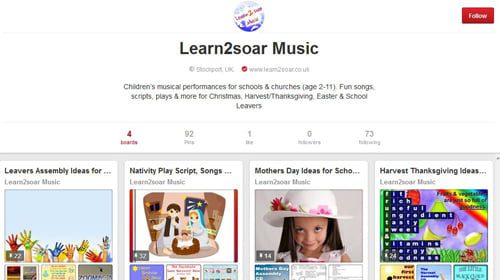 This time last year we revealed plans for 7 new publications, but as the year progressed we were sadly only able to publish 4 of them. This was because of the huge amount of time and man power needed to completely overhaul our Learn2soar Music 2015 website. As the new year gets underway, we will still be spending the first few months on major changes to Learn2soar.co.uk, but later in the year we will hopefully be publishing the following exciting new titles…

1. THE SINGING SCARECROW: A new musical for ages 5-11, written for Harvest festivals, but equally suitable for any time of the year.

4. COOL CAROLS: (Ages 7-11) Traditional carols with a new fun nativity script. This product will be a complete overhaul of our existing Nativity Play ‘O Come All Ye Faithful’ (from 2004). All songs are being edited / re-mastered / re-recorded, along with a few new songs and new scripts. Expected September 2015.

5. NATIVITY PLAY IN ONE DAY: (Ages 5-11) The follow-up to our popular ‘Christmas Play In One Day’. The ultimate time-saver for busy nativity play organisers everywhere. Six simple songs with a simple nativity script enabling you to easily stage a nativity show in just a few hours. Expected late 2015.

Disclaimer: All of the above planned Learn2soar Music 2015 products are scheduled for release during 2015. However, there is no guarantee that any of them will be released within this timeframe.

At last, a harvest songs and resource CD just for early years, featuring seven catchy songs and two editable harvest assembly scripts especially for Early Years / Infants… ASSEMBLY 1: A class assembly script with enough lines to read out even for the largest of classes. And if it’s too long, easily use the included editable assembly script to cut out whatever you want. In this assembly there are different subjects for each of the seven letters that spell harvest. H is for harvest, A is for autumn, R is for roots, etc… ASSEMBLY 2: This assembly has been designed to be read out by one teacher / headteacher / visiting speaker on his / her own. It contains all the best bits of the above assembly but in a slightly different format, with an added assembly story.

To find out more about ‘Our First Harvest’ and to hear song samples click here.